Churches Together in the Upper Wreake

Welcome to our unique Methodist Church. You are assured of a warm and friendly welcome whenever you join us. We are one church but have two centres, one in Frisby and another in Hoby.

The same people but different places! 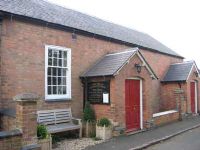 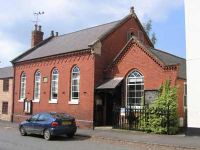 The next in-Church Communion, Service will be on Sunday, 25th June @ 3:00pm - Led by Deacon Alison McCauley

Please refer to guidance for attending services in Church.

Each Sunday, the churches of the Upper Wreake share in a

Please contact Janet Norburn prior to the service for an invitation: jannathome@hotmail.com

or for further details, refer to the newsletter below.

We are continuing to present and record the service for those who are unable to attend Church, those who are apprehensive and not yet ready to return to a gathering inside a building, and for those who have a preference for online worship. The service is transferred onto a DVD which is delivered to those people who have requested one. Some are shared by neighbours; others are saved for a Sunday; some are watched multiple times a week. If you would like to join in, it's not too late. Just contact me by email - jannathome @hotmail.com or by phone: 0116 2695295. DVDs are delivered on a Wednesday by a team of people who are happy to have a conversation with you on the doorstep. The DVD team have received many cards and notes of thanks and expressions of renewed connectedness with the Church through this style of worship.
Our world is changing and the church is part of that world. You, as the receivers of worship, have a voice and please express your view over times and types of worship, meetings and events during the week.  What do you want to see and experience? How can the Church serve our communities within South West Framland so that people have a connection with the Church in some way?
The Church is not just a building, it's a whole group of people committed to their community and its needs and seeks to fulfil those needs through the love of God in both formal and informal styles of worship, coffee mornings, afternoon tea, creative groups, internet cafe, lunches, knit and natter amongst many other gatherings.
We continue to pray for all of our villages and the spaces in-between.
We look forward to hearing from you.
Janet

I have been looking at some pictures from this time last year. It was much warmer than it is at present and everything was much further on. April last year had also been a dry month. It is now becoming the driest month of the year. I think that will mean that next year it will probably rain all month. One thing that we love to do is to talk about and predict the weather. We invariably get it wrong. One thing for sure the cold snap is not welcomed by me, as walking on light nights in low temperatures doesn't seem to match up at all, so I'm looking forward to some proper spring weather.

From a church perspective the bats in Hoby Church are waiting for better weather to come before they invade us in any great number. So far, we have very few in the church. I am sure they will no doubt make up for lost time soon and we will need to start the cleaning to keep up with what they so kindly leave behind for us. The Bats in Churches project resumes at Hoby this year, with three surveys. Two dusk surveys and one dawn survey. The results will indicate how the bats use the church and identify how we might address the issues we have and allow both human and bat to live side by side without damaging the church interior in the way that they currently do. The project has been affected by the pandemic and its funds won't now be able to stretch to funding the solutions. If we have a report that can help, that will be great, and we can then plan to carry out some work. Anyway, for now the bats have delayed their return to church which is one benefit of this colder weather! 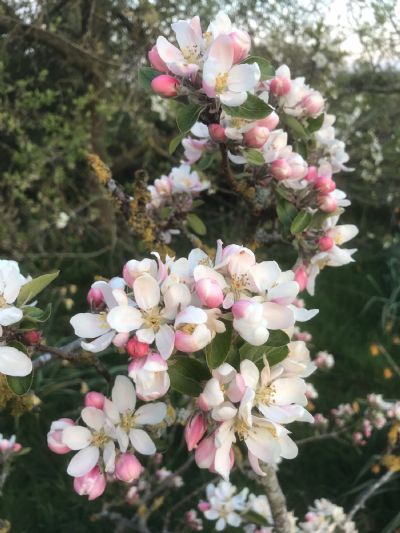 My first picture this week is of apple blossom at Barn Farm, despite the chilly weather it is giving a great display of colour and is a pleasure to see. This small apple tree looks set to give us another bumper crop this year.

My next two pictures were taken while walking between Ragdale and Six Hills. 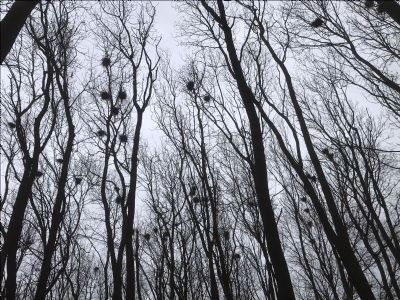 The rookery high in the ash trees is right in the corner of the civil parish and is at the point which meets The Fosse Way, the Roman Road which is now the A46. The map I have of that area is borrowed and dates from 1900. It shows four roads meeting at this point and on it is drawn the outline of a roundabout, which I think preceded the road layout we have now. This wood is on an island with the A46 to one side and the slip road to the A46 south running below it. Despite that in the middle of the wood it did seem very quiet. In the top of the trees, it would be a different world again. I am sure anyone returning to Six Hills from 1900 would not recognise the place. The small church of St Marys would no doubt be recognised, but it's outlook is changed. It used to be on the side of the Salt Road, but following road works, it is much quieter than it would have been when it had the road on its doorstep. 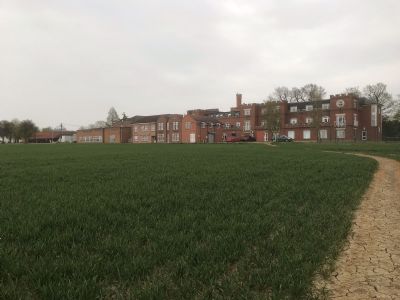 The second picture is returning from Six Hills and is of the back of Ragdale Hall. The place had much more activity that day as I passed in the early evening. No doubt they are getting ready for May 17th and some return to a more normal way of life. They are one of the highest employers in the Melton Borough so it is good news indeed that this business has pulled through what must have been a very difficult time. I am sure though that as soon as people can return, they will be back, and Ragdale Hall will be back in business.

The next picture is a one borrowed from a friend in the village. 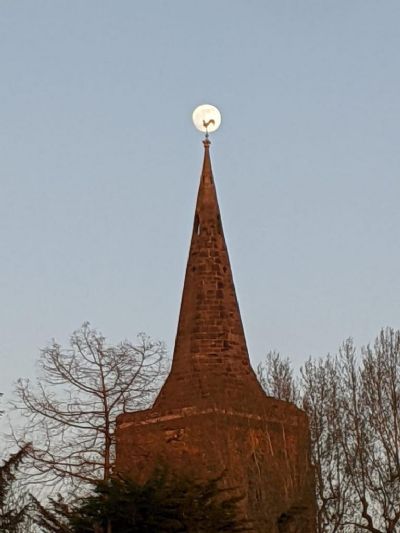 It is of the full moon on April 26th, the 'sugar pink moon'. It shone brightly in the night sky and this lovely picture catches that moon just above the top of the spire of Hoby Church and it shows very clearly the silhouette of the cockerel. Most churches have a cockerel on the top of the church. It served the purpose for most, of being a weathervane, to show the direction of the wind, but also followed a decree in the 9th century by Pope Nicholas that all churches must display the rooster on their steeples or domes. The rooster was also an early symbol of St Peter who would deny Jesus three times 'before the rooster crowed' As centuries went by the rule to place a rooster at the top of the spire went by the wayside, but the rooster stayed on weather vanes. This picture shows clearly that the tradition is maintained at Hoby like at so many other churches. However, I had some friends who lived at Great Ponton for a while, and on the tower of their parish church was a fiddle!

The next picture, saved to last this week, is of the new addition to the family. 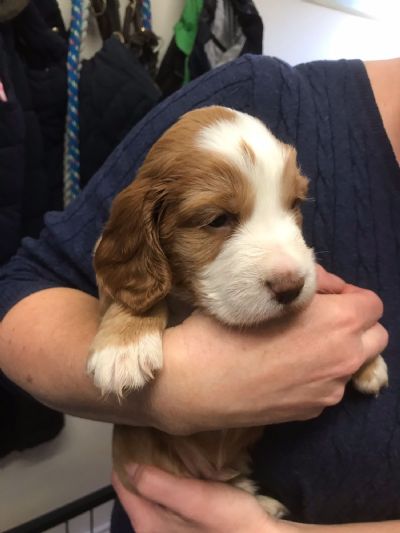 This is a picture of Edward the Cocker Spaniel, who will be called Ted. He is named after my nephew and godson, Edward. Ted is now four weeks old and was born on the 1st of April. He is currently with his mum Clover, and his 3 brothers and sister (called Olivia) in Lincolnshire at my sisters. Clover is my sister's Cocker Spaniel, and this is her second litter. I went to see them last week with mum and he was the only one left who needed a home. It is some time since there was a dog at Clematis Cottage and it felt that now was the right time for Ted to come along. Ted needs to be with his mum for a few more weeks but in late May, I can fetch him and bring him home to Hoby, where he'll be a great pal for Mable, mum’s dog. I'm sure of that. Cocker Spaniels have lots of energy, so it’s good that I like to go on long walks, when I can attempt to use some of that energy up!

Continue to keep safe and well,

Churches Together in The Upper Wreake - An Ecumenical Journey Click Here